Over 30 years ago, Lallemand Fermaid™ was launched and has been trusted by cidermakers and winemakers around the world as a leading yeast nutrient. Now Fermaid C™ is introduced specifically formulated for cider. The combination of complex nutrients and DAP specially formulated for pome fruits, apples and pears, offers the precise solution for your cidery.

Fermaid C™ is a blend complex yeast nutrient suitable for the alcoholic fermentation of apple and pear juice.

In all alcohol fermentations yeast growth must occur before alcoholic fermentation can begin. In most applications, the usual inoculation rate is 30 grams per hectoliter (300 ppm or 2.5 pounds/1,000 gallons) which results in an initial cell concentration of 3 to 4 million viable yeast cells per milliliter of juice. Under normal conditions for virtually all types of fermentation media the cell population will increase to 100 to 150 million viable yeast cells/milliliter before growth stops and alcohol fermentation takes over.

Fermaid C™ helps this maximum yeast cell density get through to the stationary phase and complete alcohol fermentation as quickly and as efficiently as possible, especially under limiting available nitrogen conditions. By neglecting to follow a proper nutrition and aeration strategy, the time to complete fermentations can drag out and may take days and even weeks to complete. Sluggish fermentations occupy much needed tank space for prolonged periods and, more importantly, they create conditions that allow the proliferation of wild yeasts and bacteria. 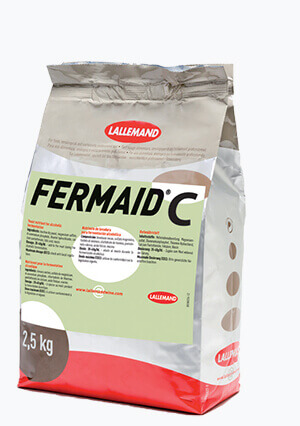 Healthy yeast fermentation will take preferential priority over a bacterial spoilage growth and will have a reduced SO2 requirement. To facilitate the efficient and rapid finish to the fermentation, Fermaid C™ supplements a series of important nutrients and bio-factors. 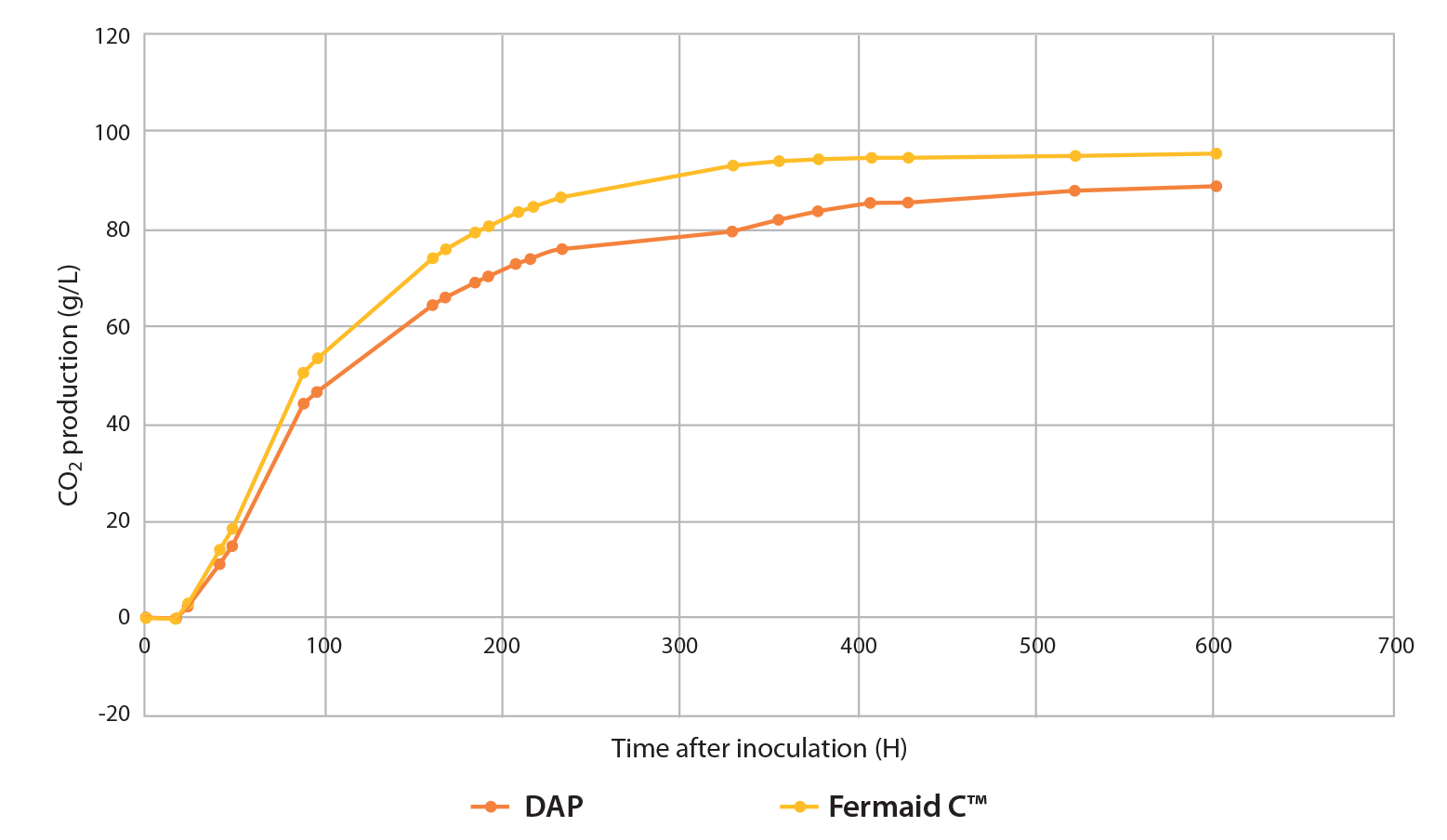 During the stationary phase of the fermentation, a yeast cell benefits from consuming nitrogen to maintain a healthy metabolism. Under limiting yeast assimilable nitrogen (YAN) conditions below 125 mg/L, fermentation may become very sluggish and can even cease. In addition, nitrogen utilization at a lower pH is less efficient. Fermenting yeast readily use the balance of yeast assimilable nitrogen from the alpha amino acids contributed by the inactive yeast and from the di-ammonium phosphate (DAP). This balanced available nitrogen , as in Fermaid C™, has been demonstrated to be more effective on fermentation kinetics than DAP supplements alone. The cell uses the phosphorus in the di-ammonium phosphate for ATP and phospholipids.

Importance of vitamins and minerals for yeast vitality

Under the anaerobic environment of cider fermentations, the yeast cannot synthesize niacin. Under conditions of restricted oxygen, ergosterol production by the yeast is virtually non-existent; yet, it is an important growth regulator. It also improves the alcohol tolerance of the yeast. In fermenting must, inactivated yeast absorb natural inhibitors and supply lipids and sterols. The cell wall portion of the yeast contains significant amounts of polysaccharides including chitin, which increases the yeast cell surface area in the must and thus reduces the level of natural inhibitors.

In nutrient deficient juice or must
When YAN is below 125 mg/L, optimal fermentation kinetics are obtained by supplementation of an additional 100 – 200 mg/L YAN, which corresponds to 50 – 100 g/hL of DAP. Although fermentation kinetics are favorable, the cider can be bitter and harsh. In these cases supplementation of DAP with 25g/hL of Fermaid C™ will result in improved mouthfeel, balance and cider quality.

For cider applications, the recommended dose is 30-50 g/hL.
It is recommended to split the Fermaid C™ addition; half at yeast inoculation and again at 1/3rd sugar depletion, especially for juice limited in available nitrogen and high sugars.

These are some of the standard questions we are asked. If there is a specific question, please get in contact.

Fermaid C™ is a blended complex nutrient formulated for the fermentation of apple juice.

Nitrogen is a critical nutrient for efficient fermentation. It directly affects ferment dynamics, such as yeast growth and fermentation rate.

Nitrogen is present as either Inorganic or organic nitrogen.

Yeast require a complete and balanced source of nitrogen for growth and metabolism to complete fermentation.

Yeast Assimilable Nitrogen (YAN) is the nitrogen in apple must/juice that yeast are able to use i.e. assimilate.

There are numerous nitrogenous compounds found in must/juice and cider including peptides, larger proteins, amides, biogenic amines, pyridines, purines, and nucleic acids but these cannot be directly used by yeast for metabolism.

The total nitrogen content of apple must can range from 0 to 75 mg of nitrogen per liter, however not all this nitrogen will be assimilable. Thus, when we refer to YAN, we are really discussing amino acids and ammonia which can be used by yeast during the fermentation. Organic nitrogen is measured as FAN (free amino nitrogen).

Apples have relatively low YAN compared to other fruits. The predominant nitrogen form is amino acids; apples contain very little ammonium. The amino acid profile of apples is limited to just a few amino acids being predominant which are quickly consumed by the yeast to maintain the yeast population. This can leave the yeast struggling to finish the fermentation and produce aroma flavour compounds.

Vitamins and minerals are important for yeast cell metabolic functions – act as enzyme co-factors, involved in energy transfer and are important in cell membrane integrity.

When yeast cells have lost their viability and vitality they struggle to complete fermentation. In addition to a stuck or sluggish fermentation there can be the development of undesirable aromas/flavours, such as hydrogen sulfide.

Loss of yeast viability and vitality can be due to numerous factors including lack of nitrogen, vitamins and minerals.

We use cookies on our website to give you the most relevant experience by remembering your preferences and repeat visits. By clicking “Accept All”, you consent to the use of ALL the cookies. However, you may visit "Cookie Settings" to provide a controlled consent.
Cookie SettingsAccept All
Manage consent

This website uses cookies to improve your experience while you navigate through the website. Out of these, the cookies that are categorized as necessary are stored on your browser as they are essential for the working of basic functionalities of the website. We also use third-party cookies that help us analyze and understand how you use this website. These cookies will be stored in your browser only with your consent. You also have the option to opt-out of these cookies. But opting out of some of these cookies may affect your browsing experience.
Necessary Always Enabled
Necessary cookies are absolutely essential for the website to function properly. These cookies ensure basic functionalities and security features of the website, anonymously.
Functional
Functional cookies help to perform certain functionalities like sharing the content of the website on social media platforms, collect feedbacks, and other third-party features.
Performance
Performance cookies are used to understand and analyze the key performance indexes of the website which helps in delivering a better user experience for the visitors.
Analytics
Analytical cookies are used to understand how visitors interact with the website. These cookies help provide information on metrics the number of visitors, bounce rate, traffic source, etc.
Advertisement
Advertisement cookies are used to provide visitors with relevant ads and marketing campaigns. These cookies track visitors across websites and collect information to provide customized ads.
Others
Other uncategorized cookies are those that are being analyzed and have not been classified into a category as yet.
SAVE & ACCEPT